Note: Throughout this blog I refer to some legal code and legal issues. All codes quoted are for the state of Iowa. Check for differences in your own state code. I am not a lawyer and all opinions are from a layman's perspective.

In Part One, we discussed the legalities of determining whether or not your could reasonably use lethal force against someone who snatched your child from you.

We discussed when someone snatching your child is kidnapping and when it is not per Iowa state law (I strongly recommend that parents look up the definitions of kidnapping in their own state).

The scenario we started with in Part One was a woman snatching a child from a mother and not returning the child to the mother but neither fleeing the scene or showing intent to harm the child.

The goal is to get the child back unharmed and quickly. What level of force do we need to use to accomplish that goal? Do we even need force at all? Do not underestimate the power of a broad smile and a feigned, "Thanks for the suggestion," while you take your baby back.

Use your Verbal Judo. Understand deescalation and ways to calm yourself and other individuals and manipulate them into doing what you want.

Also, do not underestimate the power of drawing attention to the scene. A woman yelling, "She took my baby. Call the police! That woman has my baby," can be quite effective in making the snatcher with no ill-intent return the child for fear he or she will be perceived as a child-abductor. If you choose this method enlist the help of specific individuals on scene. Speaking in generalities to a crowd (if there is a crowd) tends to bring attention but little action. Find one or two specific people you can single out and command their action. "Ma'am!," (point to a specific woman) "Call the police. That woman took my baby. ... Sir!" (again, make it specific) " Help me! That woman has my baby." You are far more likely to get responses out of onlookers.

You don't always have to make it escalate to force if it doesn't have to go there.

But, because this is a blog about force, let's discuss it.

PART TWO: FORCE AGAINST SOMEONE HOLDING YOUR CHILD 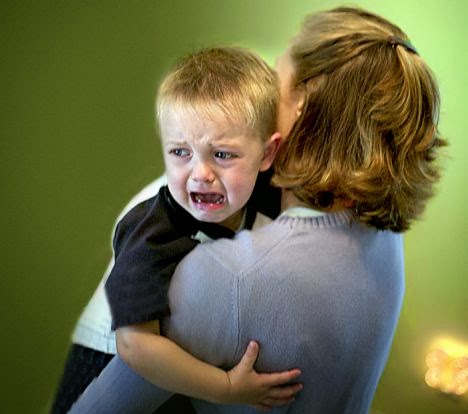 Many people who consider using force against someone holding a loved one do so with little consideration to the fact that the loved one is an intricate part of confrontation.

Even considering hitting, pushing or use of other levels of force means the possibility that the child might also be injured. The age of the child may have a large affect on how much collateral damage the child can take. A newborn who is dropped because you hit or startled the individual holding him can suffer brain damage and more. A toddler might be able to take more but what levels of force are you willing to involve your children in at what age?

What level of force are you comfortable using and how would you use it to minimize damage to your child? What training do you have to make your force effective and targeted that might spare your child involvement? At what point would the potential for damage by your hand be worth the risk of death or greater bodily harm by the perpetrator?

There are several levels of force. From least amount to most:
Presence and Commanding Voice
Many people underestimate presence and a commanding voice. People who actually study inter-human relations based on posture, presence and voice have proven that individuals who act authoritative often receive the respect and deference their presence suggests. This includes confident posturing such as holding the head up, chest broad, hands on hips and feet planted and apart.

This combined with an authoritative voice (low, loud, and demanding) can often result in commands being met.

Men may not have as much difficulty adopting a commanding presence, especially around women who are smaller than they are. A man commanding a woman to give his child back in an authoritative manner would likely have the child immediately returned to him.

Women can find it more difficult to be authoritative due to our small statures and frame or cultural upbringing. Some women mistake volume for pitch and instead of sounding low and loud they sound high-pitched which can sound more panicked instead of commanding.

Many do not consider practicing a commanding, confident presence part of self defense training, however, that skill can end a conflict or even deter one from choosing you as a victim in the first place. Practice authoritative posturing and a commanding voice. Practice it in social environments (getting everyone's attention at a gathering, teaching a class, etc).

Threat of Force
If the simple command of returning my child did not work I would immediately call authorities. It is still a level of threat of force that does not pose any risk to myself and it establishes that the situation has gotten quite serious.

Be aware that the threat of harm can be assault if it is not justified. Also be aware that your threat of force could cause the individual to escalate into threatening harm to your child.

Physical Force
From here out the level of force you choose to use will depend on more factors than we could possibly discuss. Here are some things to consider.

In the scenario, the individual who snatched the child was a woman. Would your level of force be different if it was a man? How old is she or he? Are you comfortable threatening further force realizing that this may escalate the situation or would it be better to wait for authorities provided he or she continues to remain on scene and the implied intent has not changed?

If you choose to escalate are you considering the harm you might be putting your child in? Is your priority to get your child out of the situation or to fight? Have you considered, if you are armed, that if your weapon is discovered in the altercation the snatcher might try to go for it while in the midst of a fight? What would you do do defend both your gun and your child? Has there been any change in implied intent that makes you believe you need to act sooner rather than waiting for authorities? What level of force are you competently trained in? Could you go hands on with a woman or a man? Do you carry a less-than-lethal tool you might be able to use?

If your child is injured, how would you assess and/or treat him or her?

The suggestion of pepper spray was brought up in discussing the opening scenario on Facebook and this was a response that was given:

I, for one, would GREATLY prefer washing pepper spray out of my child's face than trying to treat him or her for a gunshot wound. I would do anything I could to avoid bringing a gun into a situation involving my child (or any situation for that matter) and would not hesitate to use a less-than-lethal option if I reasonably believed it would be effective and minimize the potential for harm to my child.

Sometimes there is no time to consider less-than-lethal options or to attempt deescalation or verbal judo. The situation is immediate and dire. Action is demanded. But if you have time to consider your options you likely have time to deescalate or use a lesser form of force. If you choose to use force you must be competent in that use of force and decide its appropriateness in the given situation.

Part One: Is It Legal
Part Three: Lethal Force Against Someone Holding Your Child
Posted by Lima at 7:59 AM