We have a guy in class who is 6' 4", 250 lbs. I love/hate sparring with him because he's a monster (151 lbs and 1' 2" my superior) but if anything I do is working against him it will work against almost anyone.

One thing we are learning against such a big opponant is "cutting him down" so that vital areas are accessible. We do this mainly by attacking his knees.

Except, this is what happens when you attempt to knee someone in the soft part of the knee and end up hitting the hard part.

Of course you need to be very careful when attacking any knee while sparring because they are easily injured so this impact was pretty whimpy. Nevertheless, it left my knee looking a little worse for wear. He just stood there and laughed at me while I started making whining noises.

Moral of the story:
When you attempt to knee a knee, go deep. 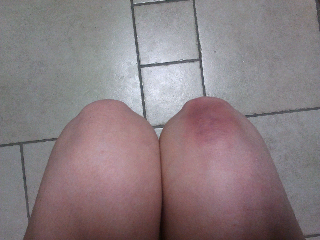 The moral of the story is, you learn from your beatings... or, at least you should.

I've now been doing Krav for just over a month. We started out pretty slow with a few class mates extra hesitent to really bring the aggression that is quite frankly needed in the kind of fighting Krav is made for.

So I wasn't really getting hit.

You'd think that was a good thing. But I'm not paying to stand around and learn a few moves that I can't really be sure are effective against a determined attacker.

I came here to learn how to fight and in order to do that.. well, you gotta get your skin dirty.
This is my first good Krav bruise obtained while sparring with a former tae student. He must have kicked me twenty-five times in the thigh and while it didn't seem to hurt much at the time I was feeling it the next day. And he was pulling his kicks big time. His full force blows would put me on my butt.

We haven't gotten much into defending against kicks but this mark makes me wonder what I could do different?

Move? Try to catch the kick? I'll have to come back later and think about my lesson learned... for now the lesson is sheer body toughening.