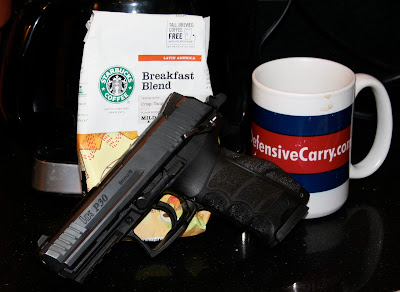 So the anti-gun folks are mad at Starbucks.

Why? Because Starbucks allows carrying of firearms in their stores.

WHY STARBUCKS?  Currently, Starbucks allows guns and assault weapons to be openly carried in its stores (in 43 states) and concealed and carried in its stores (in 49 states) (See Photos). Starbucks' compliance with the National Rifle Association's Pro-Gun Agenda was exposed in 2010 when members of the "open carry" movement began meeting in popular chains, such as California Pizza Kitchen, Peets, IKEA, Disney and Starbucks openly carrying their handguns and assault rifles. (Types of Guns)


To protect their customers and employees, all of the retail chains—except for Starbucks— banned guns from being carried in their stores.

And in an attempt to teach Starbucks a lesson, the anti-gun folks are trying to organize a Starbucks boycott starting on February 14, 2012.

They want people to email Starbucks and tell them not to allow guns in their stores. They want you to stop buying their products wherever they are sold and spread the word on social networking sights like Facebook and Twitter.

There have been some pro-gun people who have tried to organize boycotts of particular anti-gun stores and for some reason we never hear of those boycotts being successful because--let's face it--some of those corporations don't care about a small blip in their sales do to a minority group boycott. There are a lot of antis out there who can be pretty vociferous and let's not let them win. This time, however, I would love to see us do something positive and support a business that supports the legal rights of those of us who carry firearms legally.

What can we do?

We can contact Starbucks (Really, contact them!) and thank them for supporting our Second Amendment rights and not being intimidated by the threats of the anti-crowd.

We can buy their products! I know not everyone likes to spend so much money on a cup of coffee or even have a Starbucks near them but there are a lot of Starbucks products out there. Coffee creamer, a gift card for your wife, mom, girlfriend, random stranger, put aside a couple dollars a week to support a company that supports us.

Also, for fun, my dear husband is attempting to organize a Starbucks and guns photo shoot visual. Take a photo with your carry firearm (or any firearm) with a Starbucks product and post it. Post it anywhere! Facebook, here, on pro-gun forums or websites. Keep the support going!
Posted by Lima at 8:33 PM