I wore it as a neck knife most of the time though I've seen it hailed as kind of an all-purpose SHTF knife: neck knife, boot knife, pocket knife, emergency scalpel, deep concealment knife, anti-terrorism, nuclear disarmament... okay, so maybe I got a little carried away although it does seem the possibilities for this little knife are endless.

Later, when I found out that TDI was actually a training facility that did knife training I decided to take my Law Enforcement knife (for clarification, I have not, nor have I ever been a member of law enforcement. It's just the name of the knife) on a pilgrimage to the place of its conceptual birth and get some good defensive knife training. There, I met the lead defensive knife instructor, Greg Ellifritz. Sometime on the first day of the class another student and I were discussing knives and I off-handedly said, "Oh, just put an LDK in your boot."

He said, "You know I designed that knife, didn't you?"

And thus began the discussion about the LDK.

Because I've been privileged enough to keep in contact with Ellifitz (a third-world traveling hobbyist, police training, I'll-beat-you-to-death-with-a-toothpick badass) since that knife class in 2010 I was able to ask him to share his thoughts on the LDK.

He wrote the following:


"I designed it primarily as a knife that could easily be missed on a cursory search if one was taken hostage. I had been traveling through South America a lot and was worried about kidnapping attempts. There just weren't any really good knives on the market that could be easily hidden. 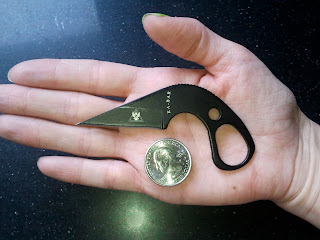 My initial thought was that I wanted something no larger than a credit card, so that I could carry it in a wallet if I wanted to. If I did that, it had to be exceptionally thin as well.

I wanted a blade design that would do a lot of damage for its small size. That's why I designed it with the straight edge and very sharp pint. It isn't designed as a general purpose cutting tool. It's designed to cut flesh like a bigger knife.

After I designed the knife, I wanted a sheath that could be hidden anywhere. I put multiple holes in it so that it can be laced in a boot or safety-pinned almost anywhere. I currently carry mine safety pinned inside and below the rear waistband of my pants when I travel in third world countries. That way I can cut myself free if my hands are tied or taped behind my back.

The hole in the handle is not designed for a finger. many people try to grip it by curling a finger through the hole. It doesn't work that well. I put the hole in the handle to save weight and provide an extra means to draw it. If the sheath is flat against a hard surface (like laced in a boot), it is difficult to get a full hand grip on the handle to draw. The hole allows you to catch a single finger inside to pull it from the sheath if you can't get a better grip.

That's about it. I sent in the design in 2006 and it went into production in 2007. It has been consistently in Ka-Bar's top 3 sellers since then. Right now they are selling about 1500 a month and demand has steadily increased over the years."


There's not a whole lot that I can add to that fine summery except to say that the LDK is still one of my favorite little knives. It has been a pretty constant companion for about four years. No matter what I did or didn't have I could almost always find a way to keep and carry the LDK. 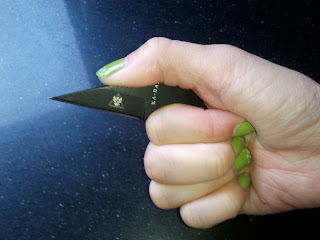 It is wickedly sharp and pointy. And if you need a fine, sharp point to wield in tight places, this is the knife you are looking for. Something else I learned in the knife class was that the wharncliffe style blade (a blade that is flat on its sharp side), though a bit weak in the tip department because of the supper sharp point, is a nasty flesh cutter. It will give you a little deeper/longer cut for your effort because the cutting surface stays in contact with flesh longer and for its full length. Something you really want when your cutting surface is only 4cm long. The curved hilt allows you to really bury the thing in your hand and get a pretty good grip on it despite it being so small. Of course, I am a very small individual and people with larger hands have complained it is too small and they feel like they cannot get a grip on it but the design gives you the best it can afford so that you don't loose what makes it ultra light and concealable.

Though its intended purpose was not as a utility knife it has seen some light utility work from me. It has spent many nights hung from my bedpost, an immediate tool if needed. And it does excel at flesh cutting... just ask all of the hang-nails I have cut off over the years. I've given it as a gift and gone swimming with it. There is a security in knowing that it is always there and so easy to carry no matter what the occasion or the attire. I've pinned it into pockets, purses and my bra. And I've also used it to escape from restraints (I was practicing escaping after being zip-tied to one of our kitchen chairs... a couple of times). It also works wonders on tape. 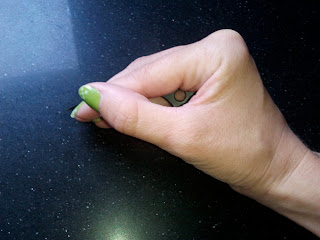 And it certainly does excel as a tool of escape. It's small size does allow for easy maneuverability with your hands restrained (either in front of you, behind your back or individually). The only concern is cutting yourself but if you were actively trying to escape from hostile restraints a few nicks and cuts would probably be the least of your worries (although people with larger hands and poor dexterity might need to worry about dropping it and might want to practice). I know it sounds a bit "out-there" to be talking about how good a knife is at helping you escape restraints but, hey, it's why the knife was designed! What's even better is that if someone decides to check up on the prisoner/hostage/restraint-escaping-practicing-wife the knife can very easily be palmed or hidden between your fingers and, whella!--Knife? What knife?--It's advisable to keep your escape as clandestine as possible.

Just this week I decided it was time to actually try the LDK out as a boot knife.

Search though I may I could find almost no one who talked about actually putting the LDK in his or her boot (but, then again, my husband is constantly reminding me that my google-fu is not very strong).

While switching the laces of my boots from cloth to paracord I laced my LDK into the top of my left boot and there it has stayed. Because I'm not trying to actively hide it from cursory body-sweeping, dirty South American cops with itchy trigger fingers and shallow pockets, I did not bury it as deeply into my boot as I could have. As you can see by the photo the hilt protrudes above the top of my boot. But lacing it further down would and could it much better if that was the goal. A quick pat down would leave a searcher feeling nothing but laces, as he would expect.

For my purposes, squatting down in a confined space where getting into deep pockets might be a bit trying, I can slip the LDK out of my boot and cut what needs cutting.

Because this one now resides in my boot, I've talked about getting another in case I do want to pin it into my bra or pocket again and don't want to unlace my boots. And when you can find it on amazon.com for about $15, why not, right?

I've seen people put paracord around the hilt to give it a little more to hold on to and it's certainly an option if you aren't looking for deep concealment in a narrow or uncomfortable place--like the back of your shorts, for instance. It also might help those with large hands and less dexterity. And if you want to deep conceal it again, just take the cord off.

The sheath is very basic plastic that has continued to be tight for me despite lots of taking the knife in and out (and even putting it back in backwards a few times). I believe it comes with a stretch of paracord (you'll have to forgive my not remembering. I bought the thing four years ago). If in use as a neck knife, however, I use a bead chain (as shown above) for the slimmer profile and comfort.

A great little knife for a great little price. I can definitely see myself getting another. You should, too. If you want to.