Announcing You Are Armed 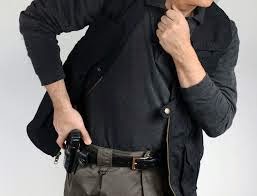 For the purposes of this blog post we're going to assume you are a concealed carrier.

You are confronted with a potential threat. You feel it may escalate to a confrontation involving serious bodily injury or death.

Do you tell or otherwise demonstrate to the individual that you are armed?

There are four ways that you could do this:

Implied. Sweeping your cover garment aside and/or placing your hand in the general area of where a firearm is likely to be kept. This is often called a furtive movement and widely recognized by criminals and law abiding citizens alike.

Brandishing. For the purposes of this post we're going to call brandishing the display of a firearm while it's still in the holster with intent to intimidate. Usually brandishing means the display of the firearm is not justified but we'll get to that in a moment.

Implied or brandishing combined with a verbal confirmation. Placing your hand on the firearm or displaying it while it's still in the holster and saying, "I'm armed."

I'm usually a "never say never" kind of gal. But I will say that some things are generally not a good idea. Any of the above responses, in my opinion, are all bad ideas.

The thinking, of course, is that announcing you are armed increases the stakes for the bad guy to a point where he decides to deselect you as a potential target. This has happened and it may work at deterring the threat . But, it may not and when it doesn't deter the threat it generally means you are dealing with someone who isn't afraid of your gun or isn't convinced you will use it, or use it effectively. In which case you are probably in for a violent encounter--an encounter you would be in anyway even if you didn't announce you were armed but now wherein you have lost a significant surprise advantage.

Not only am I a strong believer that a firearm should be kept concealed pretty much at all times, but I also believe that the only time a potential assailant should know that I am armed is when I'm pointing my firearm at him or he's hearing really loud noises and wondering about the strange sensations in his body accompanied by flashes of light.

This isn't an opinion I've borrowed from others. I'm sure there are others out there who will disagree with me but I've decided it's better not to tip my hand. I want the element of surprise and here's why.

You Announced That You Have Something Desirable
A gun is a pretty desirable thing to have if you are a career criminal. And if you don't mind beating someone up to get one, here is someone who just announced that there's one available for the taking if he's willing to take the risk in fighting for it.

The only thing that will likely save you is his ineptitude, your skill, luck or a combination thereof.

There Could Be More Than One
If your training is reputable you are being taught that bad buys come in pairs. In a confrontation you should always assume there is another assailant ready to jump into the fray when you least expect it. That could also happen to be the moment you decide to announce you are armed while fixated on bad guy #1. While there is no honor among thieves, there is potential for a lot of violence, and announcing you're armed might be all that the second assailant needs as ammunition to unleash his violence on you instead of allowing his buddy to interview you further or initiate contact. And his attack will likely be targeted and brutal (more on that below).

Just saying you're armed allows him to speculate as to where it is, but placing your hand over the firearm or displaying it allows both assailants (again, assuming there are two) to plan for it accordingly if they decide to continue their assault. Depending on factors such as distance, holster type and carry method and skill you may not be able to get your firearm out of the holster before your attacker is on top of you and doing serious harm.

All the while bad guy #2 is sneaking up behind or bad guy #1 is creeping closer and closer and planning his attack.

Dialog is dangerous. If you have to say more than, "BACK OFF!" you're starting down the rabbit hole. A few of the close quarters classes I have been to have demonstrated the dangerous potential of dialog. We naturally allow people to get closer to us when we dialog with them. Dialog also slows down our reaction time because we're thinking about responses instead of defense or offense.

Your safest bet is to shut down dialog immediately with anyone you perceive could be a threat.  If you want to dialog, verbally establish a boundary and have a plan should it be crossed.

Yes, you could scream, "I'm armed! Back off!" and leave it at that and refuse to engage in any other dialog but then you're still leaving yourself vulnerable to my next point.

You Set Yourself Up For A Targeted, Brutal Attack
When the bad guy knows you're armed and decides to fight you anyway he will target your weapon or attempt to overwhelm you with such violence you are unable to use that weapon. If you don't have retention skills, a very good retention holster and the skills to resist that kind of violence you will likely lose your firearm and/or your life.

All you have to do is watch altercations with police officers. One of two things happen:
1) The violence of the attack is so brutal the officer rarely has opportunity to defend himself with his firearm, if at all.
2) The gun is immediately targeted and fought for.

What ends these scenarios is death or defeat on the officer's part (at times resulting in the firearm being stolen), a competently trained officer being able to retain his firearm and regain control and fight through his injuries (make no mistake about it, there will likely be injuries--possibly severe) with skill and aggression, the officer using a hidden weapon the bad guy didn't see, or the force of other responding officers ending the confrontation.

You retain a small advantage if you have not revealed the firearm's location (i.e. saying you are armed but not indicating where it is by either touching it or displaying it) but you lose any advantage of surprise.

And here is where I will refer back to the Extreme Close Quarters class I attended in the fall of 2013.

In the final force-on-force scenario with Greg Ellifritz, Greg decided to try to disarm me even though he hadn't seen my weapon. He knew I was armed but he didn't remember where I was carrying my gun (if it was appendix or behind the hip). While we fought, if you watch the video (NSFW, btw), you can see him searching behind my hip for where I would normally carry my Glock. That little bit of confusion on his part allowed me the opportunity to simulate stabbing him in the groin with my trainer knife. I never actually did get to my gun until after I broke contact but neither did he. Had Greg known exactly where my gun was I'm not sure how things would have played out. I prefer to never find out. Or to find out, but in the safety of a training environment because I'm morbidly curious like that. In real life, however, I prefer not to have people trying to take my gun away from me.

You Lose A Fighting Arm
If you have done any force-on-force while armed you know how hard it is not to reach down and finger your firearm during the interview portion of the scenario. You know your gun is there and you know that if you need to use it you want to get it out quickly. There's a psychological comfort in having your hand on top of it even if it's not necessarily the best tactical move, especially in close quarters.You soon learn that if you put your hand on your gun you aren't protecting your face and you have one less appendage to use in fighting and controlling your attacker so that you can get in a better position to use your weapon of choice.

Yes, there are times to put your hand on your gun. No, I can't tell you when that will be. A lot of that has to do with distance, gear, skill, size and you will have to figure that out for yourself in a safe training environment. In my opinion you should either have your hands up in a defensive posture ie. the fence or your gun out and in your hand.

In my opinion, the hand goes on the gun as part of the draw stroke.

The key point here is that before you decide whether or not you want to announce you are armed and how you are going to bring a gun into a fight you need to be getting training in those scenarios and practicing them.

This is multiplied if you chose to carry openly on a regular basis.

It's a really bad day when you get your gun targeted, have to fight for it and potentially taken from you and shot with it.
Posted by Lima at 6:52 AM